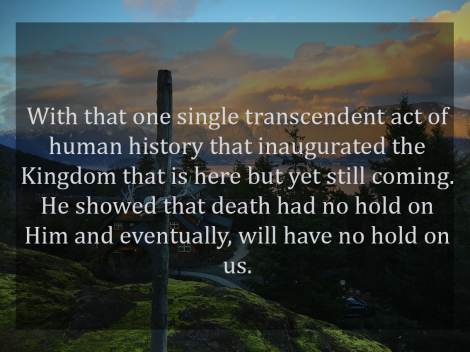 The world as we knew it ended at 7.32 AM December 10th 2018. That was when we got the phone call every parent dreads. Our wonderful and deeply loved son Chris had died suddenly from what we later found out was a pulmonary embolism, the result of a work place injury he had sustained just over a week before.

We had been called by his wife Karla about 45 minutes before and had jumped in the car scrambling as fast as we could to drive the hour and fifteen minutes to their home. Instead, the call came as we were stuck in a traffic jam, trying to get to him in time. I will never forget the howl of despair that escaped me as Helen wept beside me, or the desperate sadness of calling his sister Sarah to tell her. Or lying next to him on the floor an hour later, trying to summon the words to say goodbye. Knowing he had already gone. That everything was broken.

In the aftermath, trying to breathe, trying to stand, trying to comprehend, I found myself asking questions of God, asking him how this could happen, what could we have done differently, how could we carry on without Chris’s laughter and infectious joy in our lives? I wanted to find solace, to feel God wrap me in his arms like a father would for any deeply hurt child.

But all I heard was silence.

At first I couldn’t understand it. Why when I needed him most, did it feel  like He had deserted me? And I am not alone in that. CS Lewis in A Grief Observed, written after the death of his wife, wrote:

“When you are happy, so happy you have no sense of needing Him….if you remember yourself and turn to Him with gratitude and praise, you will be — or so it feels— welcomed with open arms. But go to Him when your need is desperate, when all other help is vain, and what do you find? A door slammed in your face, and a sound of bolting and double bolting on the inside. After that, silence.”

Yet after a while, as Lewis did,  I came to view this differently. I came to sense a God who understood. A God who could comprehend my pain. Someone who had been through this themselves and stood to one side, not locked behind a bolted door, but silently, sadly, tenderly, mourning with us. Because I came to see that Chris’s death wasn’t planned by God. It wasn’t his fault, but rather, it was a consequence of the battle God is engaged in between good and evil, life and death. Chris’s death and the horrendous pain it caused us, deeply pained Him as well. I came to realise that God knew that we needed time, not simplistic answers. God had been there himself. He had lost a child as well.

On Good Friday, we celebrate a terrible thing. The crucifixion of Jesus, a killing in one of the most despicable and dehumanizing ways possible. Crucifixion was a torture used by the Romans to show a level of degradation that would put any person off of challenging them. They and the local Jewish authorities thought that killing Jesus would put a stop to a potential rebellion and end a challenge to their way of doing business.

They thought it would be the end. But it was only the beginning.

Three days later, on Easter Sunday, Jesus rose from the grave. With that one single transcendent act of human history that inaugurated the Kingdom that is here but yet still coming, he showed that death had no hold on Him and eventually, will have no hold on us. As Paul wrote in  1 Corinthians 15:55

In the stunning act of resurrection, Jesus opened the way to God that had been shut off from the human race. In this luminous moment, we were given the keys to a new future. A future where there will be no more pain or suffering. One where we will all be involved in the redemption of all creation. Where justice for all will reign and where the great reuniting will happen.

In that truth, I can have hope. I know that my beautiful son is currently with Him, waiting for his resurrection body in a golden place called Heaven. I know that I will see Chris again and indeed I have asked God to grant me one great favour: That it is Chris who welcomes me when I get there.

I and my family are still tender and broken. I still weep every day and try to find it in myself to carry on. We still don’t have all the answers and we never will. We still find it hard to believe the awful thing that has happened to us. And we are still overwhelmed with waves of grief, knowing that there is an ocean of minutes before we see Chris again.

On Easter Sunday this year, 2019, we will have a private ceremony in England, at a pond that Chris used to play in as a child. We will spread some of his ashes on the water and we will weep as we remember him. Then we will go to Lincoln Cathedral and take part in the Easter Sunday service, celebrating the fact that we were born for an eternity that has been opened to us through Jesus death. These two things will be connected because, yes, we have lost so much. But thanks to what Jesus did on this oh so special day, we have gained so much as well. And the day will come when we will be reunited. All of us.

What others are saying about JustUs

The JustUs Partnership is a collaboration between two organizations that are passionate about seeing lives changed through education – both in Africa, and here in Canada.